Australia’s oldest person Alfie Date, who shot to fame after knitting sweaters for penguins in need, has passed away peacefully in his nursing home at 110 years old.

Born in 1905, Mr Date died on Monday morning at Peninsula Village aged care facility on the Central Coast of NSW.

His daughter Marjorie Ransome has recalled her father’s illustrious life has said he has a wealth of happy memories to look back on, reports Daily Telegraph. 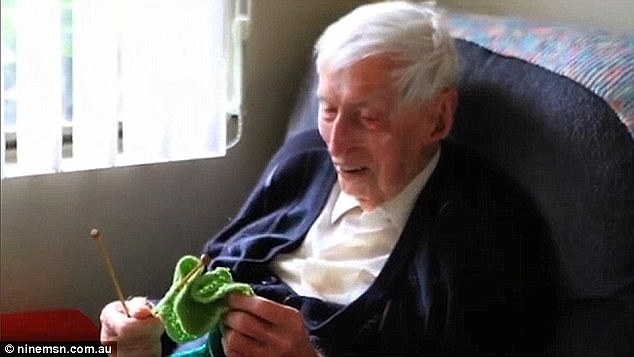 Alfie Date passed away on Monday at Peninsula Village in NSW

His grandson Stewart Date has posted a tribute on social media, remembering his grandfather as a ‘very special’ man who was a ‘champion and legend’.

‘Well after a great knock, and a amazing life my grand father Alfred Samuel Date passed away this morning [Monday] in his sleep,’ the Facebook post read.

‘110 and out now but he was a champion and a legend , and will always be. Rip grandpa see u [sic] on the other side.’

Last year, Mr Date grabbed headlines around the world after he volunteered to knit sweaters for little penguins on Phillip Island in the wake of an oil spill.

After taking up knitting in 1932, Mr Date leaped at the chance to volunteer for Phillip Island’s Penguin Foundation to knit sweaters for the penguins to wear.

Little penguins are only found in New Zealand and southern Australia, and there is a colony of 32,000 who live on Phillip Island.

Mr Date said he always made sure his jumpers for the tiny penguins – who can be poisoned by oil spills – were up to par.

‘I like to make it without mistakes and I don’t excuse myself for doing it. (But) I think there is an excuse for a person who’s gone beyond the normal span of life,’ he said.

On his 110th birthday Mr Date received birthday cards from Her Majesty The Queen and Prime Minister Malcolm Turnbull, as well as a Central Coast Mariners jersey from coach Tony Walmsley.

When the father of seven was asked at the celebration what his secret to living to such a ripe old age he responded, ‘waking up every morning’.

Friends and family will bid farewell at a funeral service next Tuesday at Greenway Chapel, Green Point.

His eldest son Robert, an Anglican minister, will conduct the service.